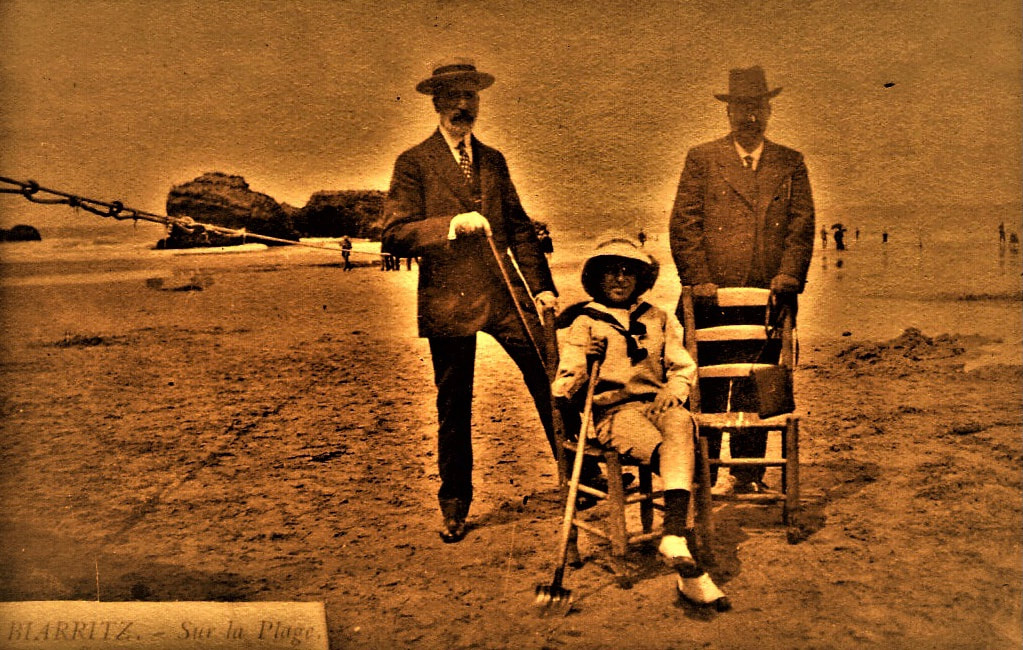 Biarritz, 1914. There they are, enjoying a day at the beach. My great-granddad, elegant in his “canotier”, Spanish diplomat and composer, was appointed Director of the Grand Orchestra of Biarritz a year ago. My granddad, future General of the Spanish Navy, dressed as a sailor, smiles as he sits down. A friend accompanies them. 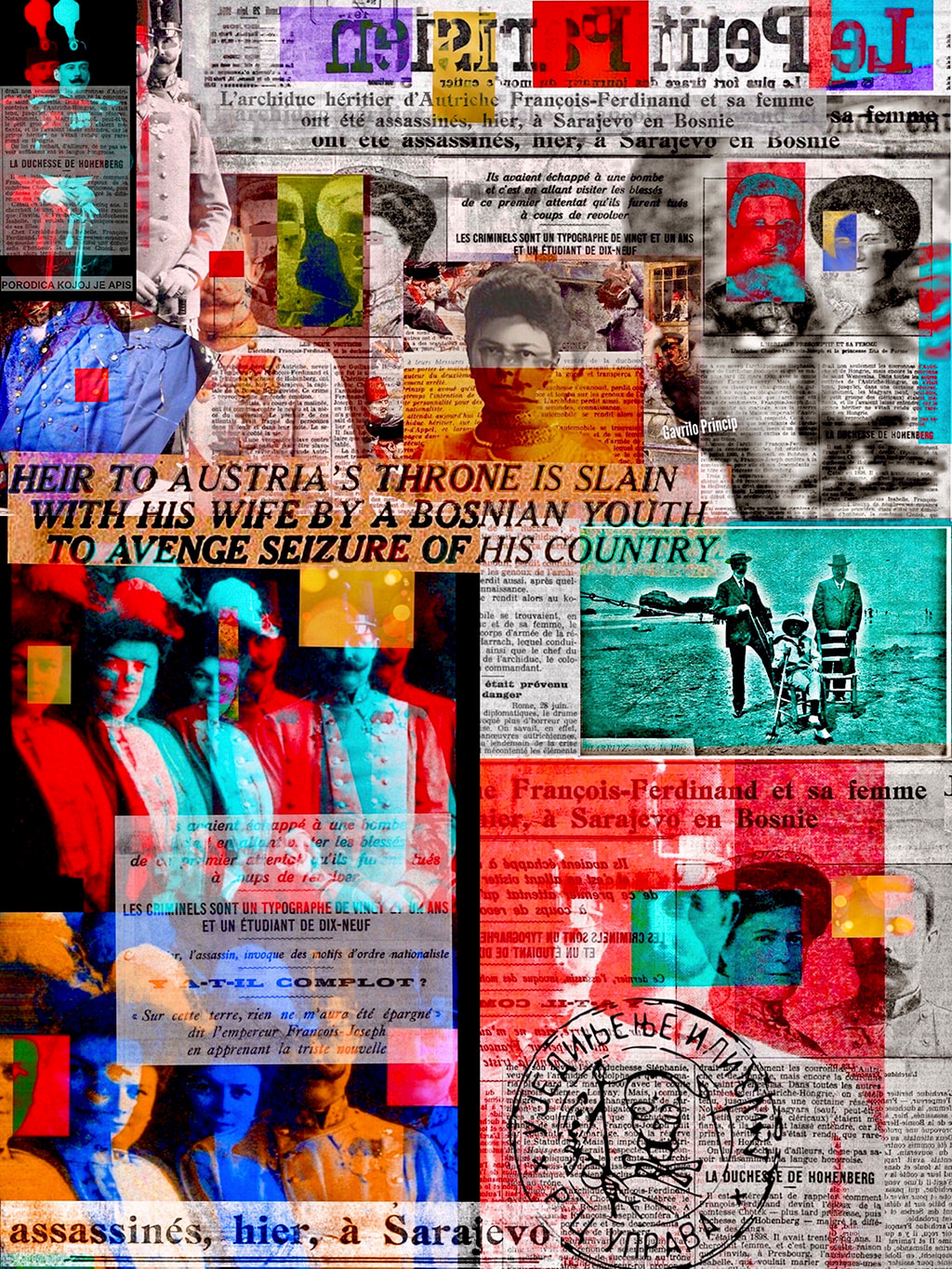 AND ALL THIS FOR A SANDWICH Stefan Szweig: "Never was Europe stronger, richer and more beautiful. In 1900 - 10 there was more freedom, carefree and carefree than in the previous hundred years". But Sarajevo came. On a hot day in the summer of 1914, Archduke Franz Ferdinand and his wife visited the city. A sense of humiliation was palpable among the dreamers of Greater Serbia, who wanted to throw off the Austrian yoke. The assassination plot is a disaster. Gavrilo Princip, a member of the Black Hand led by "Apis", coming from the fashionable Moritz Schiller grocery store with a bacon and cheese sandwich, thinking that the attempt had already failed, sees the archdukes' car approaching by surprise and the opportunity to eliminate the hated oppressor of his homeland, throws the sandwich away and shoots. In an instant, a sandwich brings Europe to the brink of the abyss. 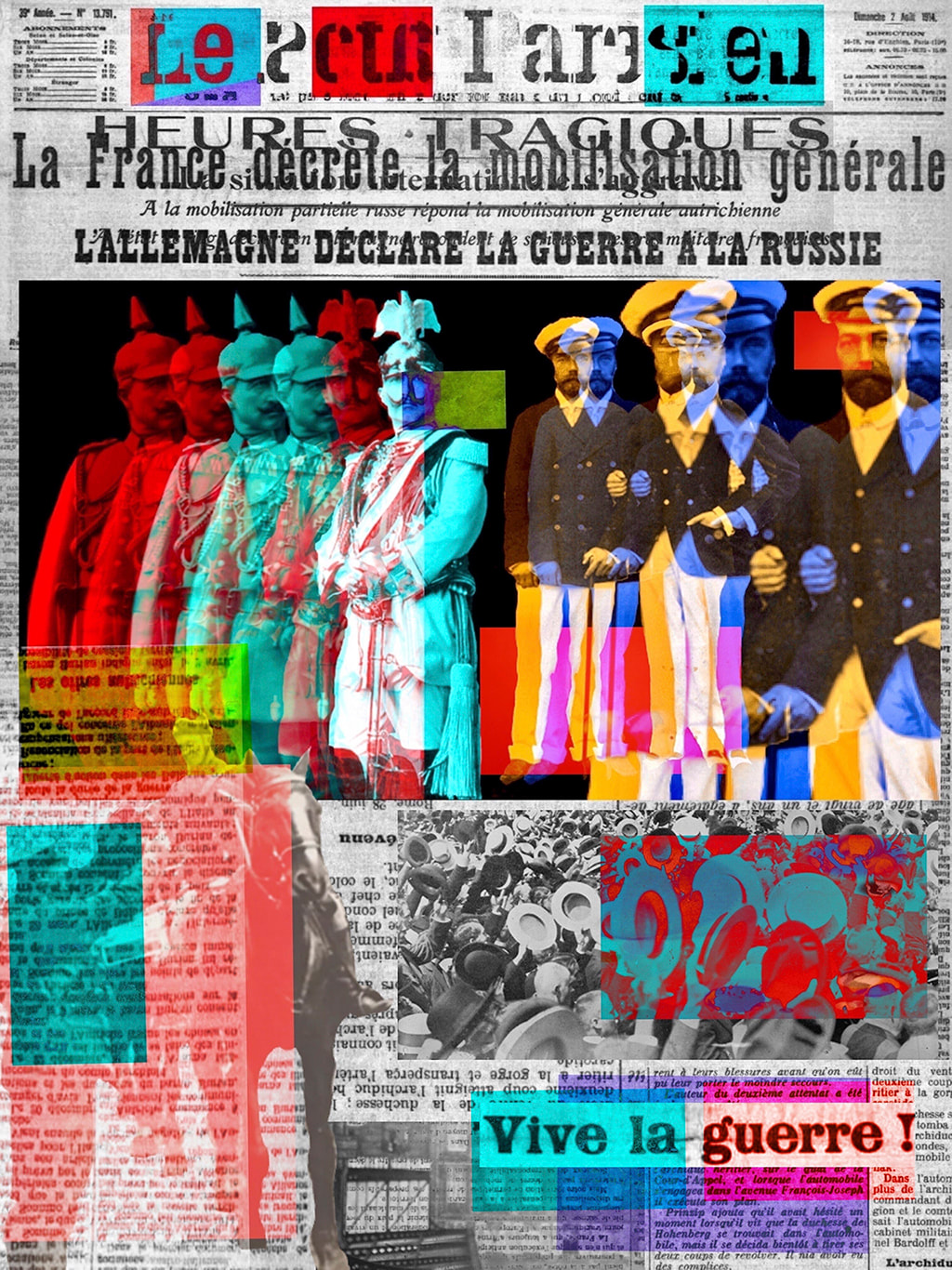 LONG LIVE THE WAR OF THE COUSINS! I start working with the front pages of various newspapers constructing new images, composing from multiple photographic exposures, superimposing and manipulating texts, from Sarajevo to the declarations of war, the Kaiser Willy and his cousins, the Russian Nicky and the British Georgie, the delirious and unconscious enthusiasm of people shouting "Long live the war!"......... The press, thanks to technological advances, quickly reaches thousands of readers. The telephone transmits news published in national and local newspapers within hours. In 1910, Paris had 70 newspapers. The press was not only informing but also creating public opinion, culture and consumer advertising. But when the declarations of war began a few days later, in August 1914, everything changed in the press as well. As the first battles raged and the death toll rose, the press was to be censored, manipulated and controlled by the governments in an extreme nationalist rivalry. 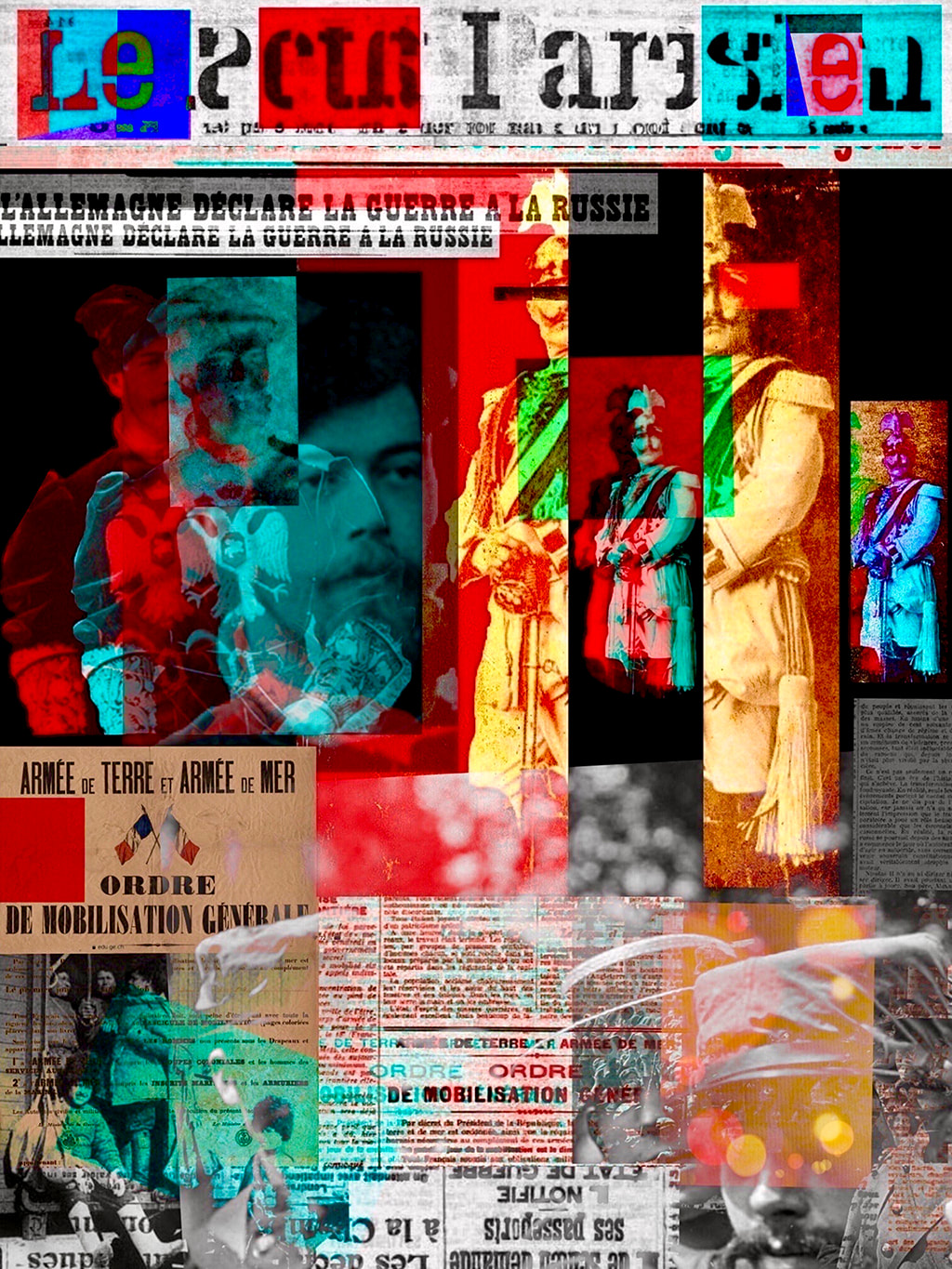 THE MOBILISATION!!! "Then came August, the ultimatum, the mobilisation and the war, to which everyone rushed joyfully, confident of a sudden victory. The days began to grow shorter and shorter, while the war dragged on longer than expected and nothing was resolved. And everyone was plunged into this atrocious conflict, fuelled by hatred for hatred's sake, propaganda and revanchism, driven to unreason and the trenches, mired in filth both at the front and in the rear." Emil Haylofts, professor and encyclopaedist. 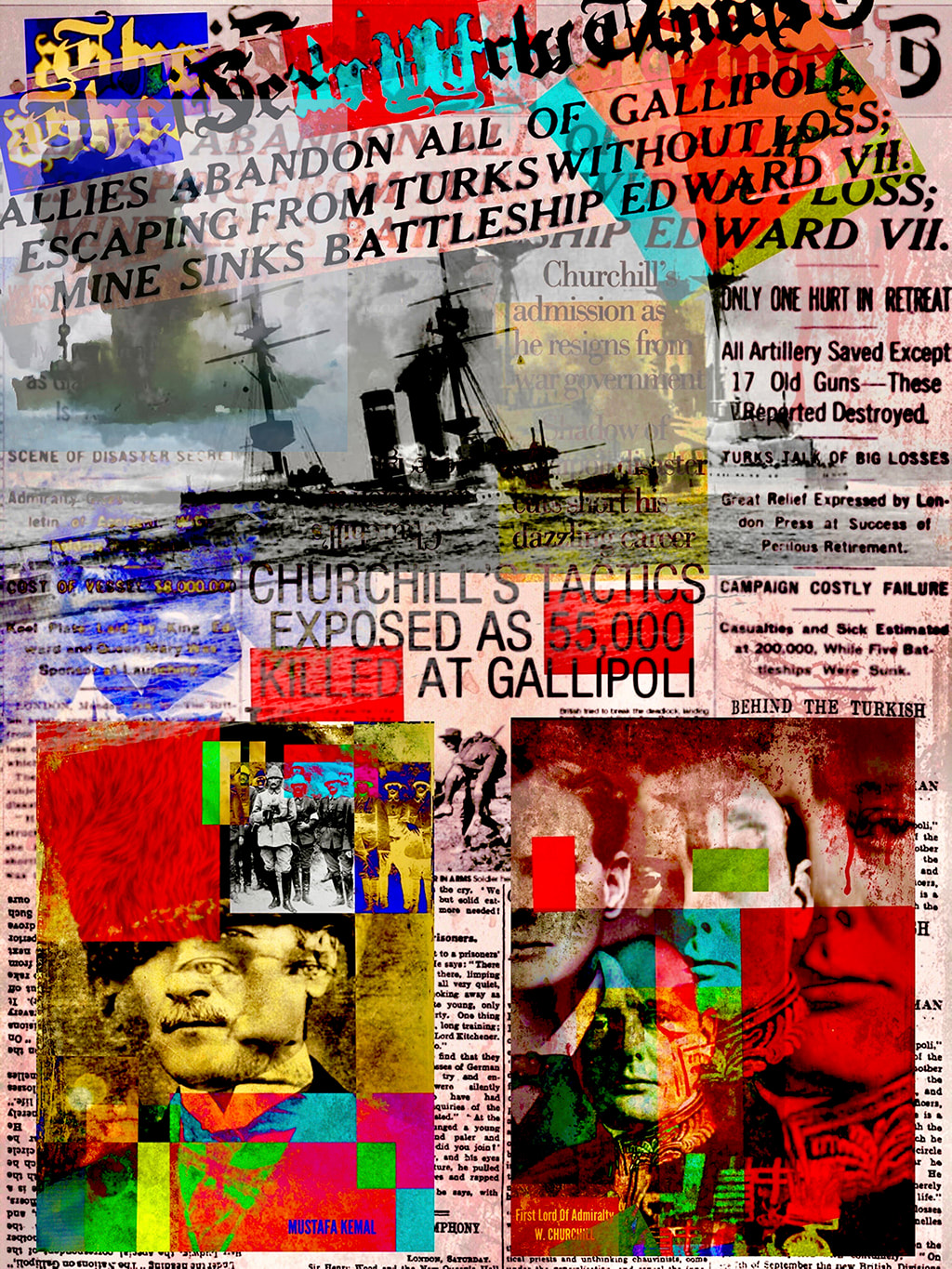 GALLIPOLI Gallipoli was one of the most shocking battles that provoked the fall from grace, not for long, of “Grand Admiral” Winston Churchill and the outstanding performance of Mustafa Kermal, the future president of Turkey, called Ataturk, who modernised the country with such advanced measures as the vote and political participation of women, divorce, state secularism, the banning of the veil, etc. 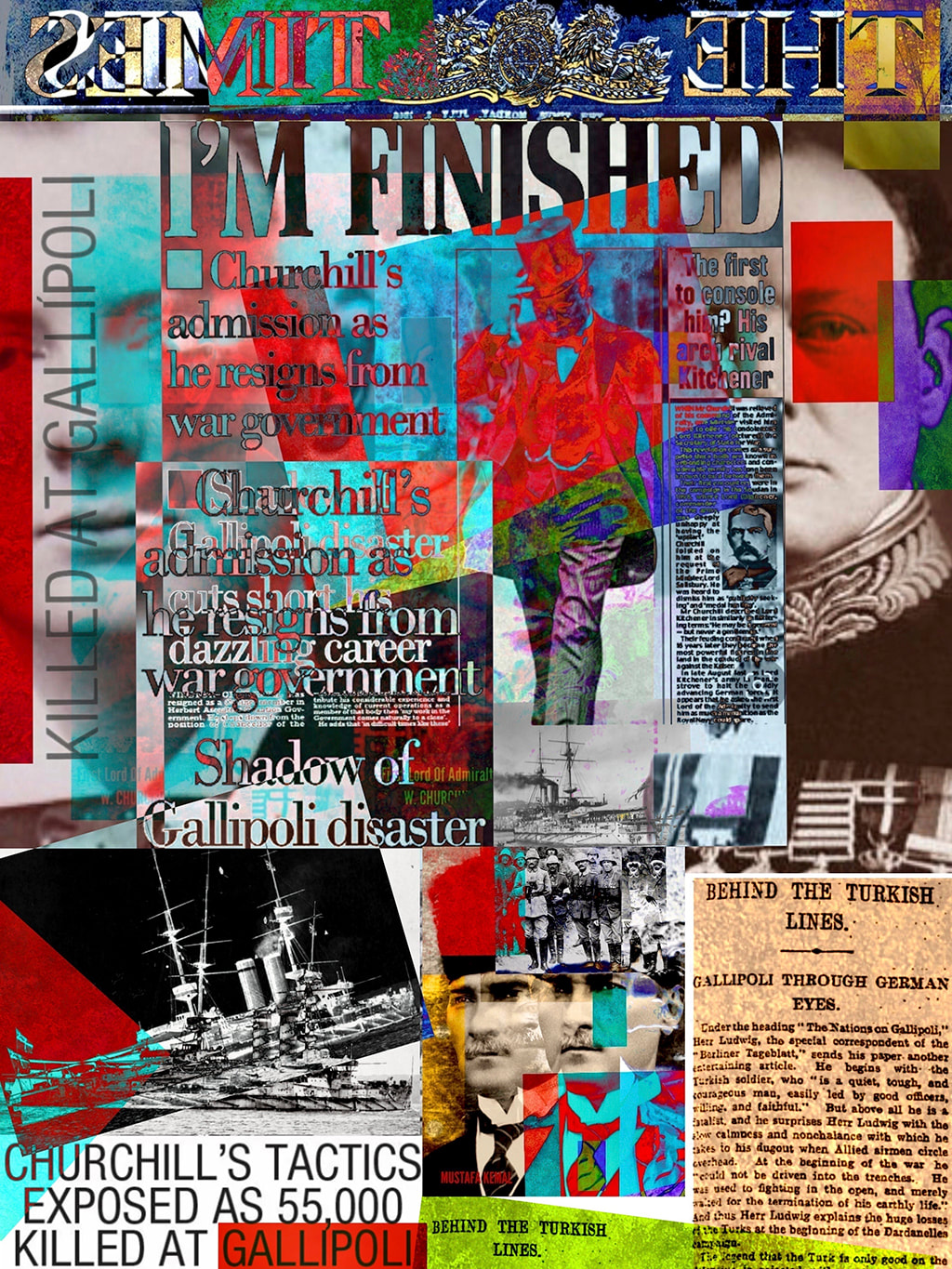 THE HELL OF THE SOMME More soldiers died on 1 July 1916 than on any other day of the war. It was the most tragic day in the history of the British Army and the most barbaric demonstration of the narrow-mindedness of the politicians and military commanders of the time. In the first six minutes there were almost 20,000 casualties. By the end of the day, 19,240 British soldiers were dead, 2,152 were missing and almost 36,000 were wounded. The Germans suffered between 10,000 and 12,000 casualties. In all, more than a million soldiers were killed, and it was an utterly futile battle that dragged on in the hellish trenches for four interminable months and seventeen days. Generals Douglas Haig, Max von Gallwitz and Ferdinad Foch had the sad honour of being the main protagonists of this barbarism. 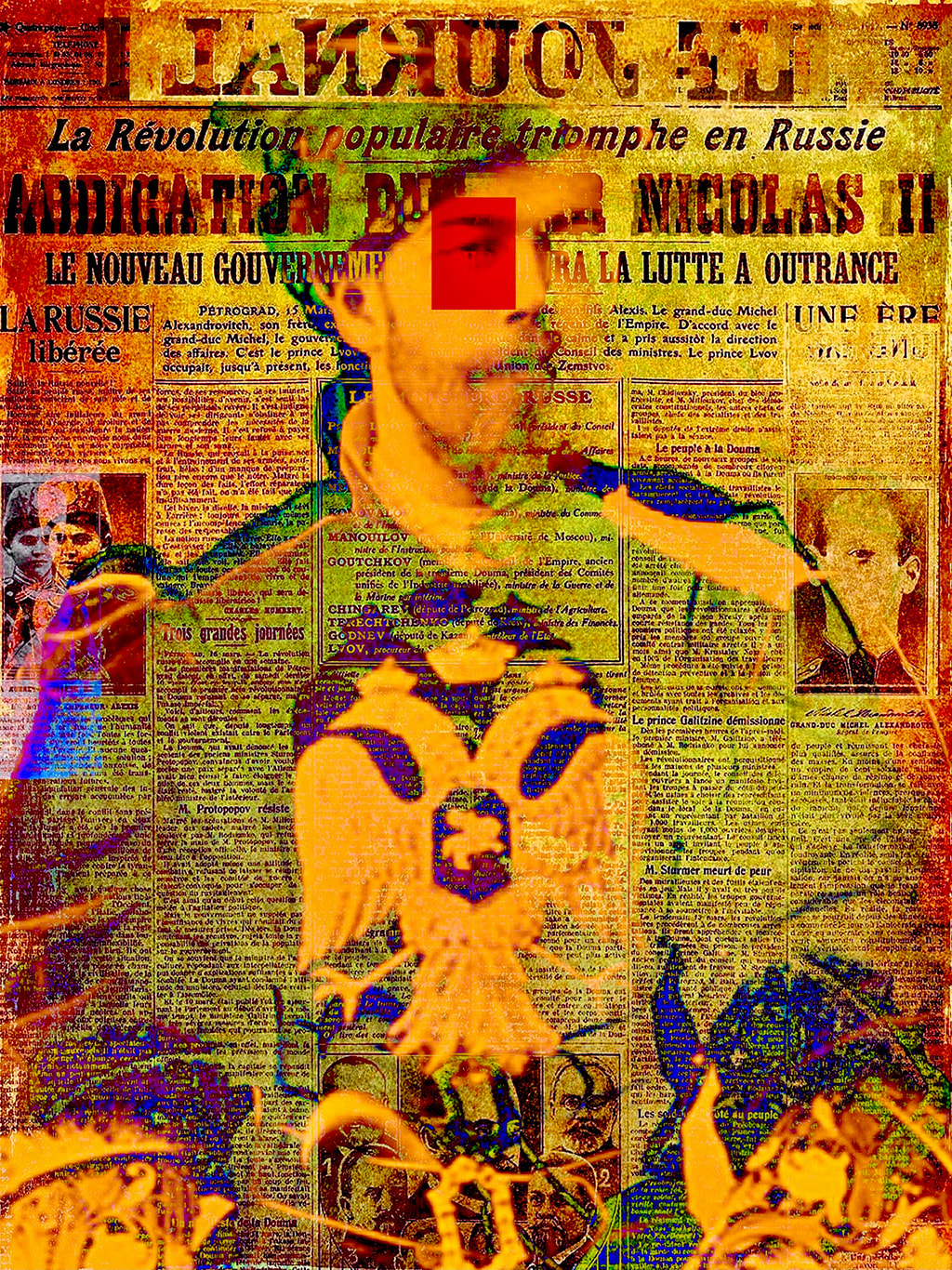 COUSIN NICKY "Ruzski came to see me in the morning and read me his very long conversation by direct cable with Rodzianco. According to it, the situation was such that in Petrograd any minister of the Duma had no power to do anything, since he had to fight against the Social-Democratic Party, represented by the workers' committee. My abdication is demanded. (...) In essence what they are saying is that in order to save Russia and to keep the army at the front calm, this step must be taken. I have accepted. From headquarters they have sent the draft of a proclamation. In the afternoon Guchkov and Shulgin arrived from Petrograd, with whom I discussed the matter and to whom I handed over the signed andcorrected proclamation. At 1 a.m. on the morning of the 16th, I left Pskov with a broken heart because of all that had happened. All around me there is only treachery, cowardice and deceit." Nicholas II. Extract from his diary after his abdication 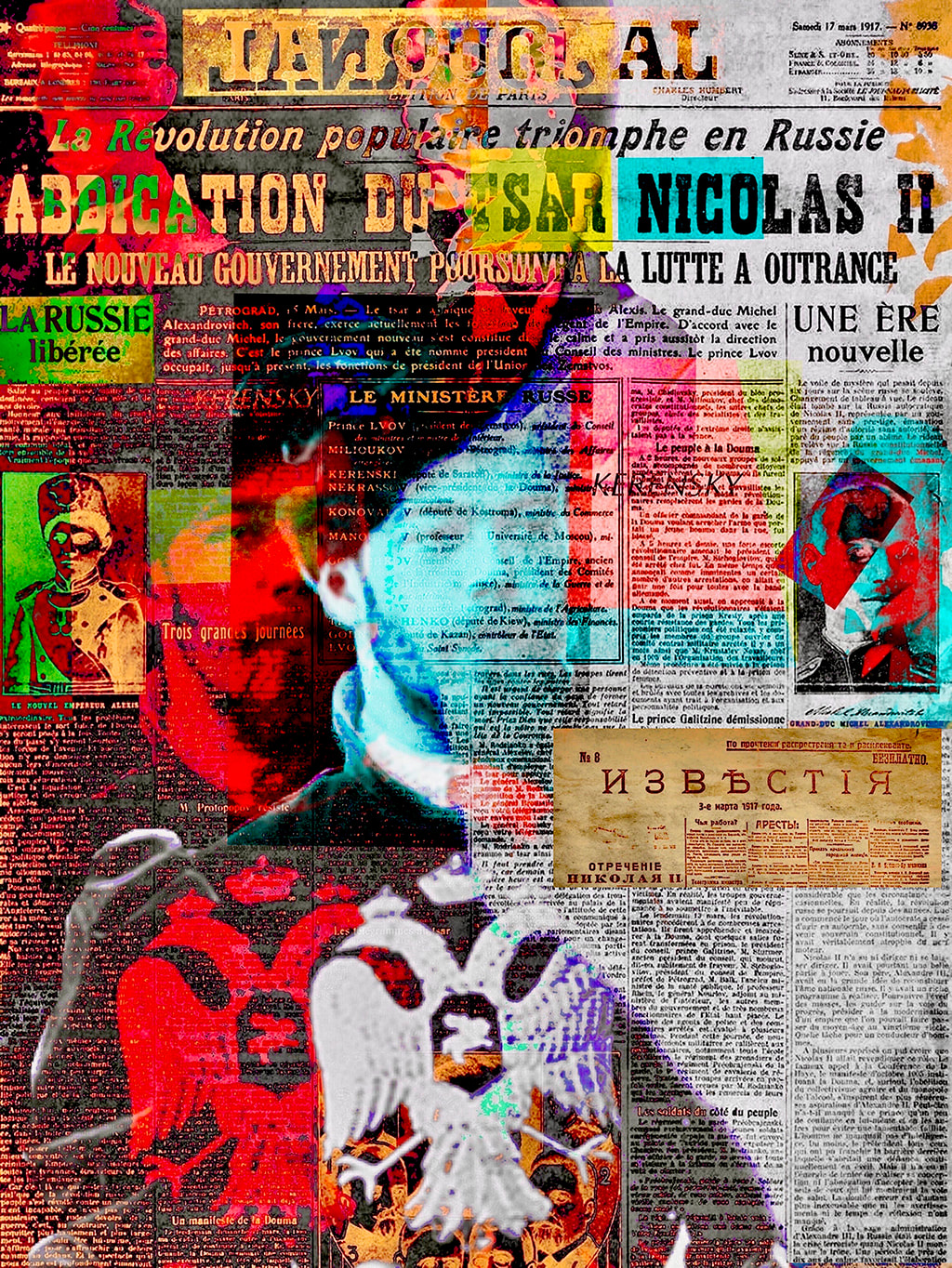 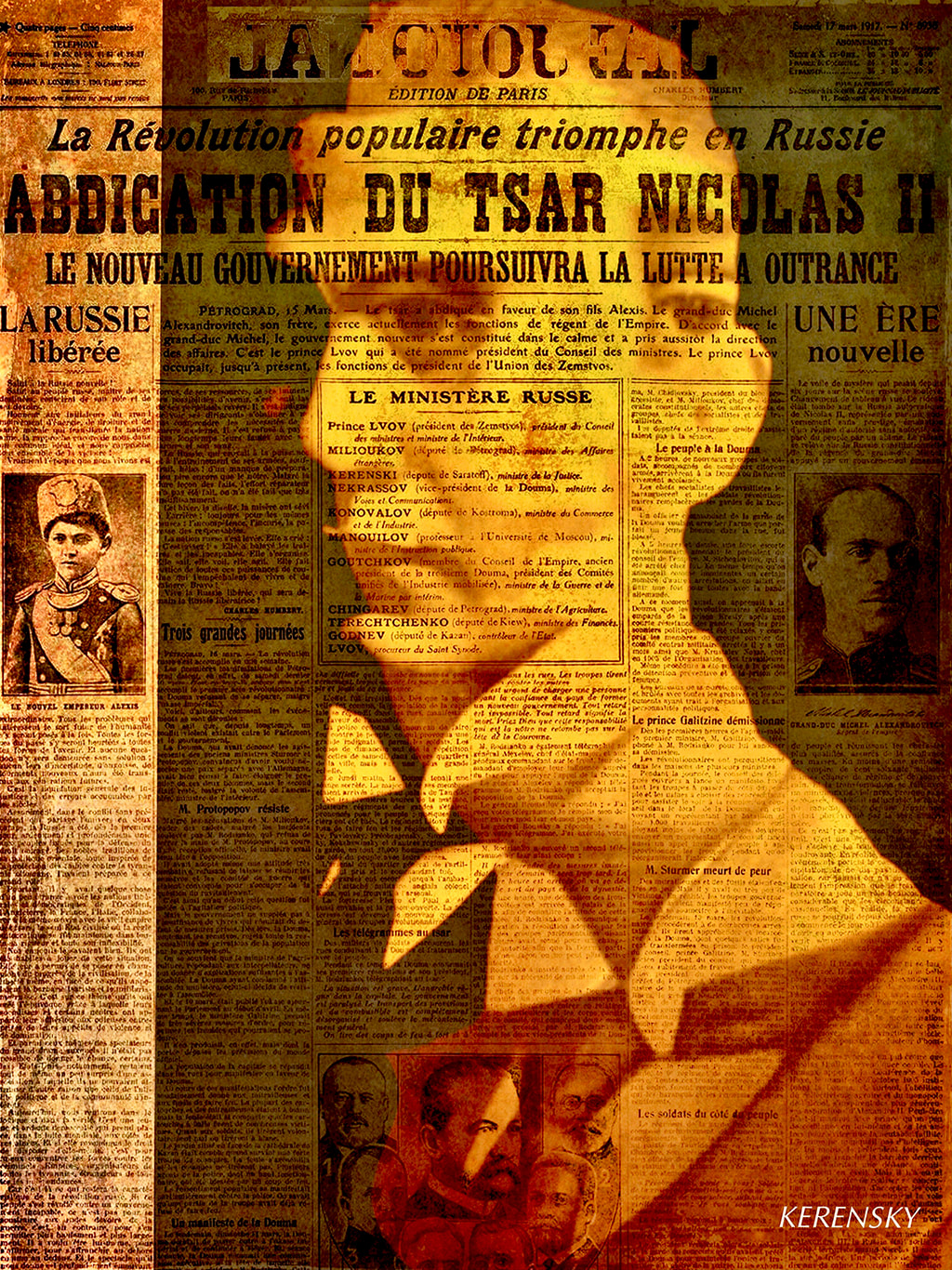 THE WINTER PALACE NURSE "Yesterday Lenin failed miserably before the Soviet. He was forced to leave the room amid great jeers. He has sunk for ever." Miliukov, Foreign Minister of the Provisional Government. July 1917. Kerensky issues an order for Lenin's arrest with the intention of killing or imprisoning him, but Lenin escapes to Finland disguised as a railwayman. In October, all members of the Provisional Government are arrested by the Bolsheviks except Kerensky, who escapes from the Winter Palace in a Red Cross ambulance disguised as a nurse. Shortly afterwards, betrayed by the Cossacks, escapes again from St Petersburg, disguised as a sailor, when he was preparing to recapture the city. He never returned to Russia and died in New York in 1970 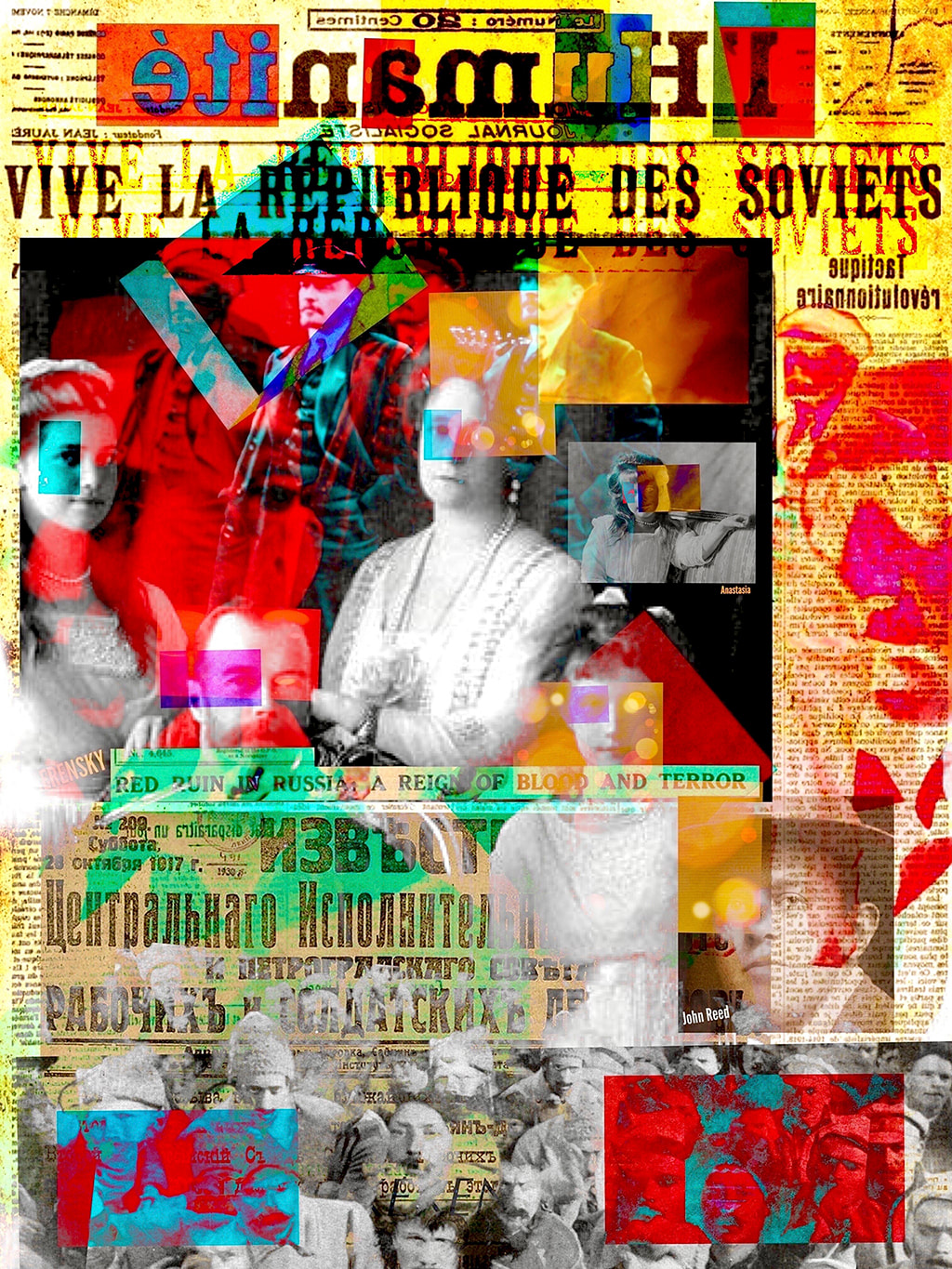 TEN DAYS THAT SHOOK THE WORLD "The Russian revolution is the most powerful event of the World War". Rosa Luxemburg "In the struggle my sympathies were not neutral". John Reed October 1917, the eyes of the world were focused on Europe and the Great War. What was happening in Russia was anecdotal, unnoticed. Reed describes the Revolution on the front line, being one of the few witnesses who was there, committing himself to the cause and turning his account into a journalistic myth. An adventurous and persecuted man in the United States, a founder of the Communist Party in his country, he died of typhus in Moscow in 1920, aged just 33, and is buried among the heroes of the Revolution in the necropolis of the Kremlin Wall. His debut novel was published the year before his death with the preface written by Lenin himself. "All Power to the Soviets". Lenin. Political terror was introduced with the creation of the Cheka in December 1917, the assassination of the Tsar and his family the following year and the creation of the Gulags. The Bolsheviks were suspicious of everyone. Snitching became the norm. 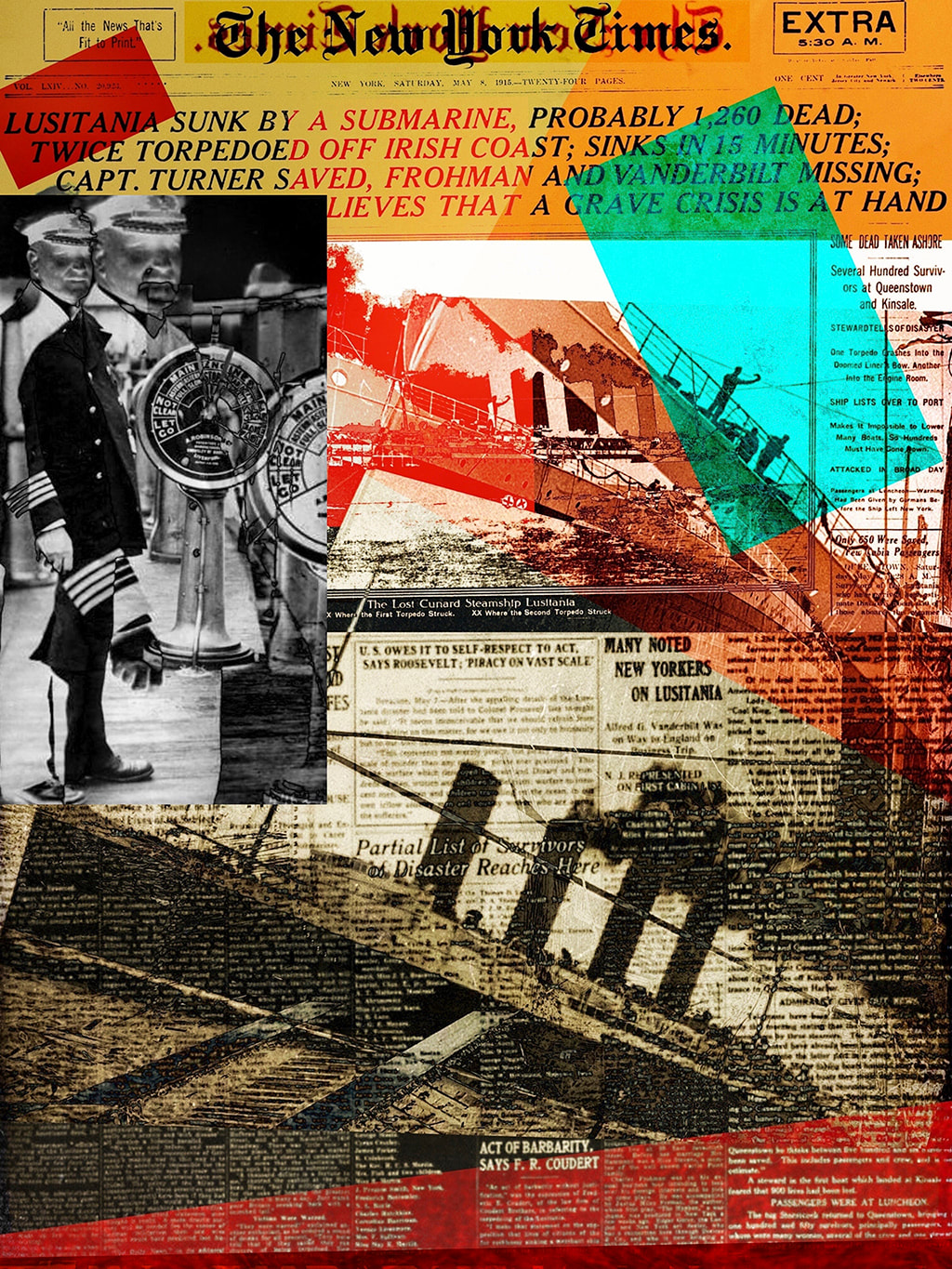 LUSITANIA 14.00 hours on 7 May 1915. "A four-stacker and two masts. Appears to be a passenger ship of large dimensions". Walther Schwieger. Seaman of the German submarine U-20 And Captain Walther C. ordered the last remaining torpedo to be fired. In barely twenty minutes, the Lusitania sank off the Irish coast after leaving New York with its 1,192 occupants, including 94 children and 35 babies. For the first time there was talk of "war crimes". This tragic action sent shockwaves through the United Kingdom and the United States, where most of the passengers were from. "Travellers intending to cross the Atlantic are reminded that a state of war exists between Germany and her allies and Great Britain and her allies and that passengers travelling to the war zone on ships of Great Britain or her allies do so at their own risk." German embassy advertisement in the American press. Was it yet another tragic war action or a perfect excuse for US intervention in the war? 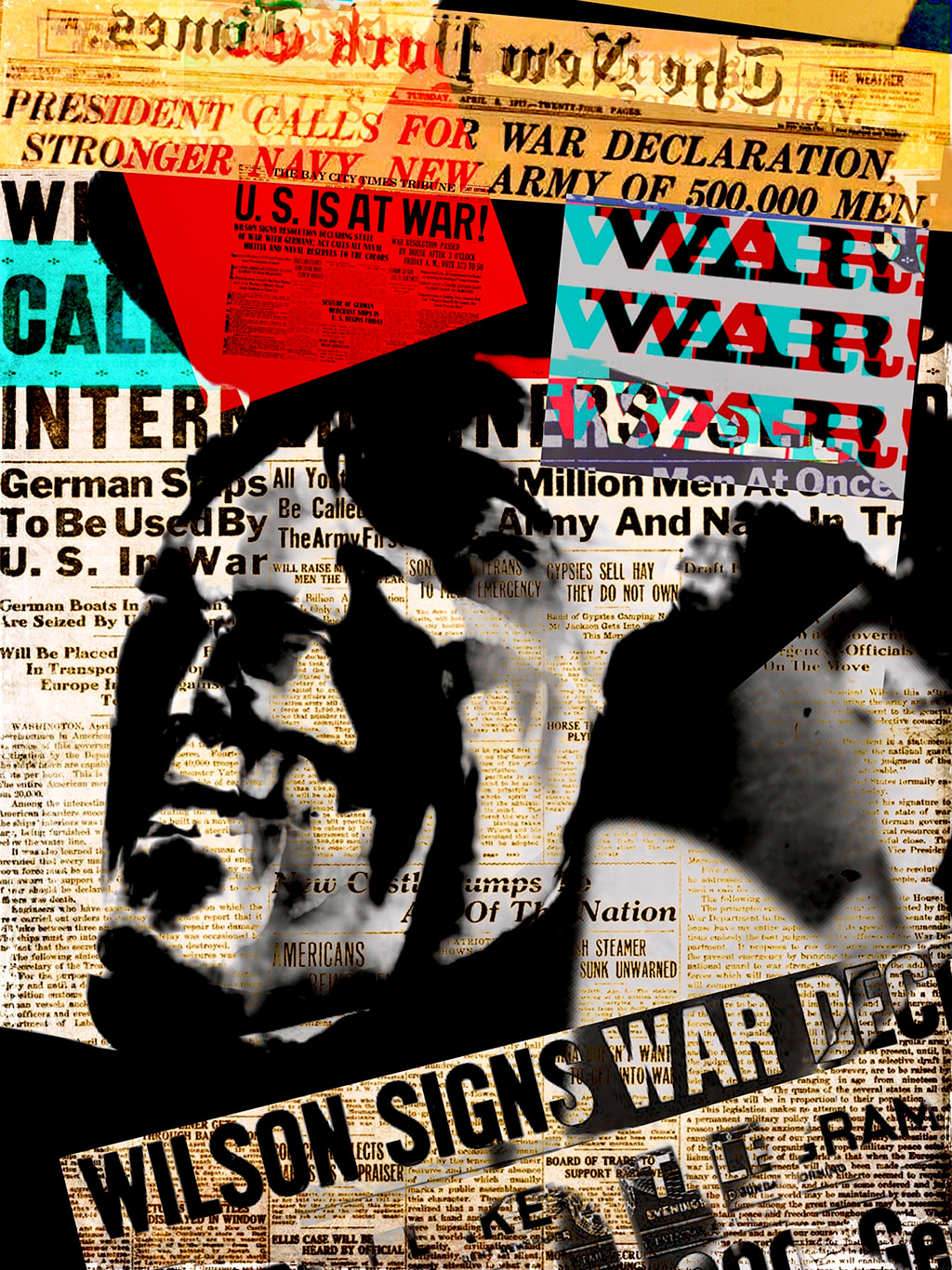 THE AMERICANS On 14 April 1917 the United States declared war on Germany and Woodrow Wilson created the Committee on Public Information (CPI), a gigantic propaganda organisation to convince Americans of the necessity and nobility of intervention in the war in order to counteract the European press reports of the terrible massacres of millions of soldiers in the trenches. It promoted patriotic pride, soldiers' exploits, sacrifice and hatred of the German enemy with an intensity never seen before. It was led by journalist George Creel, considered a "mukraker", with teams of journalists, writers, publicists, musicians... who organised rallies and parades, wallpapered the country with over 100 million posters, produced films, published magazines and press releases, involving thousands of enthusiastic volunteers while the government encouraged self-censorship and tightly controlled the press. What was to become known as state propaganda began. The Great War became a global war, and from this point onwards the tide turned definitively. 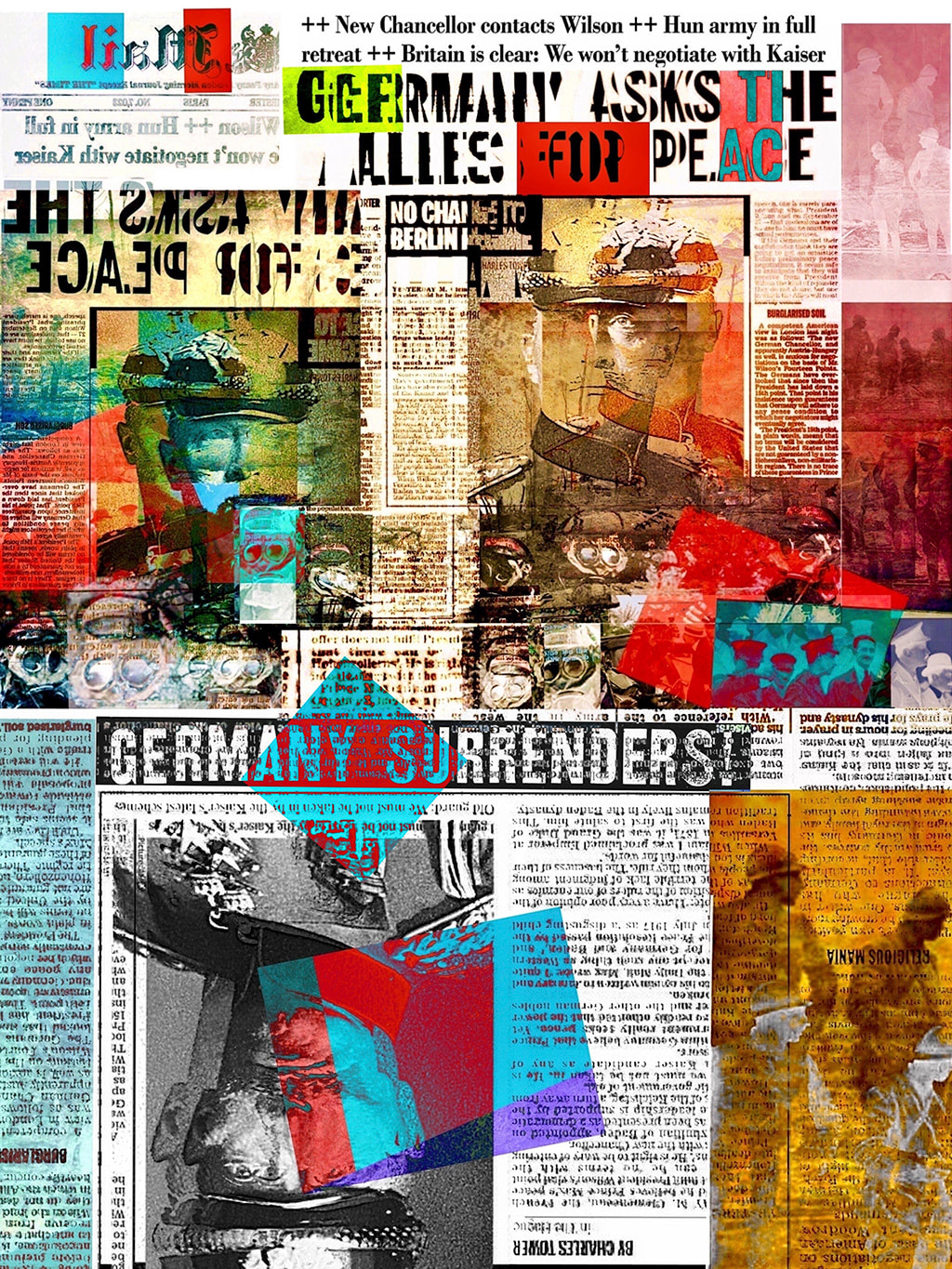 THE LUGGAGE AND THE AUDREY HEPBUR´S GRANDMOTHER In November 1918 the Kaiser has his headquarters in the Belgian city of Spa while Berlin is in chaos with street protests, socialist demonstrations, food shortages and political movements to push him into abdication and the creation of a republic. The revolution was spreading across the country and Germany was already defeated, the troops refused to fight any longer. On 9 November Hindenburg asked him to abdicate and the Kaiser went into exile in Holland. "God's hand has fallen heavily upon us, His will be done! On Hindenburg's advice, I leave the army, after terrible mental struggles. As God wills, auf wiedersehen. My eternal gratitude for your faithful love, your deeply mortified husband". Letter from the Kaiser to his wife "The old, rotten has collapsed, militarism is eliminated, the Hohenzollerns have abdicated." Philipp Scheidemann, Social Democratic leader. In May 1920, the Kaiser marched to a castle in Huis Doom that he bought from Baroness Ella von Heemstra, whose granddaughter became known as Audrey Hepburn. Shortly afterwards, five trains with 59 carriages brought him his "luggage".